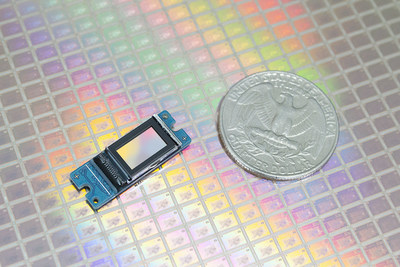 RDP370F has 2 million mirror pixels on a 0.37″ diagonal display. With pixel density over 6,000 ppi (pixels per inch), its small 4.3 µm pixel pitch makes RDP370F the best match for wave-guide or light-guide optics that are becoming the mainstream selection for thinner and lighter head-worn AR glasses. It guarantees the best image quality with continuous phase and amplitude modulation. With embedded LED driver circuits for easy application, its 100 mW power consumption allows longer battery life, which is essential for full-day-use light weight AR glasses.

"This new panel has let us take one step further to the future, where people would wear lighter AR devices just like typical eyeglasses," said Brian Kim, CEO. "Heavy weight and lower resolution are not all headaches of recent AR devices. Even for the recently announced advanced optics, AR and VR users are not happy with lens artifacts such as distortion and rainbow effect in lens edges. RAONTECH provides not only competitive microdisplay panels, but also provides controller chipset solution with electronic-lens-correction features to customers," added Brian.

RAONTECH has released 0.55″ 1080P, 0.5″ 720P, and 0.7″ 1440P LCoS microdisplay panels along with controller chipsets in previous years. These panels and controller chipsets have been adopted in various AR and HMD devices including newly released AR glasses shown at AWE 2019 and consumer FPV (first person view) goggles for drones available in the market.

"One single technology does not win all market," said Brian. "For AR, reflective microdisplay will prevail in the next 5 years because it's brighter and production-friendly. Self-emitting display, micro-OLED will find its home in VR or in-door AR devices, and micro-LED starts its commercial existence in TV or smart watches. With RAONTECH's competitive semiconductor technologies, we are collaborating with tier one global companies to deliver these three microdisplay technologies to consumer and industrial markets, targeting right application with right timing to volume production."

Since 2012, RAONTECH has invested over 30 million USD developing microdisplay and its controller chipset, while 10 million USD backed by Korean venture capital partners. Now it's looking for strategic partners for Series-C funding round to expand its LCoS microdisplay products and to accelerate micro-LED and micro-OLED product development.