LOS GATOS, Calif., Oct. 1, 2019 /PRNewswire/ -- Playper, a company specializing in paper-based, AR-enhanced toys and games, has announced the launch of its first product to hit the market via Kickstarter on October 8th. Kung Fu Boogie is a new augmented reality dance battle game for kids. It integrates crafting 3D characters made 100% out of paper with all the fun of dance battling to create a unique AR experience for kids on mobile. Key features include that it is proudly eco-friendly and nonviolent, while offering a hands-on approach that is both easy and straight forward for kids of all ages.

Inspired by 70's Kung Fu culture, the game revolves around epic dance battles between a series of ten diverse characters. Players can collect characters through the purchase of blind bags. The player then constructs each 3D paper-based character, which is a fun twist on the modern paper doll and paper crafting. Once the toy is assembled, the player uses the free Kung Fu Boogie app on their mobile device to scan the toy and bring it to life as their character for the dance battles.

Each Kung Fu Boogie character features unique moves and capabilities making each an exciting addition to their collection. Players can gain achievements and level up throughout the game unlocking new dance moves, costumes, and other features.

Kung Fu Boogie is the result of research and focus groups with parents, kids, and toy experts. Playper is led by leaders in the kids, technology, and CPG space. Founders Michael Bruza, Webb Knudsen, and Susy Christiansen have been in the kids content space for two decades now, working for companies like Disney, Pixar, Dreamworks, PBS Kids, Scholastic, Walden Media and Leap Frog. They are motivated to create experiences that help young minds see the world in a new way, find skills they didn't know they had and help them grow into curious adults.

Early focus group parents stated: "I love that this uses both craft and technology in a new way - so interactive and progressive!" While other games may require a series of expensive purchases, Playper's Kung Fu Boogie only requires the paper character sold in affordable blind bags. "Most of us already have a device," said one parent "You don't have to buy special goggles or some expensive thing for kids to be able to use this."

Playper has designed engaging characters and stories surrounding Kung Fu Boogie. From the supposed master of boogie, Chuck Lee, who is the epitome of Kung Fu with his bright orange gi (kung fu uniform) to the feisty Pinball, a character inspired by retro arcade games. With such diverse characters, Kung Fu Boogie promises not to be a toy that gathers dust on a shelf!

Playper, think play with paper, promises to deliver products that offer both interactive storytelling and the perfect combination of digital and hands-on play. The company believes in the magic of delivering a product that captures the imagination while offering a safe environment for play. Playper is also committed to being environmentally friendly with its paper products and by avoiding the use of plastics. Playper wants to build a future of fun, cutting edge, creative play for kids. Kung Fu Boogie is the first in what is planned to be a long line of exceptional kids products that will be loved by parents and children alike. 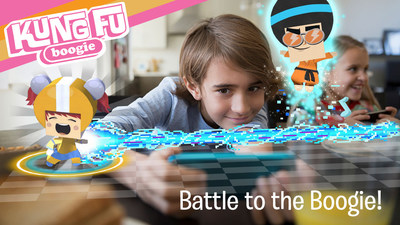