Demaurex engineered and industrialized the original Delta robot in 1988, based on a patent of Prof. Reymond Clavel of the Ecole Polytechnique Federale de Lausanne (EPFL), introducing high speed, vision guided product pick and place systems to the robotics market for the first time. Demaurex and Genesis Robotics' collaboration to develop this latest generation system represents a significant leap forward in the field of parallel kinematics, as two powerful technologies combine for the first time.

"Demaurex's Delta Robotic machines and systems have been the class leader for many years, and with the incorporation of LiveDrive Direct-Drive Motors we will continue to hold that position well into the future," said Frank Souyris, General Manager at Demaurex SA. "The LiveDrive technology offers new levels of simplicity and ease of use, eliminating the need for costly, bulky and unhygienic gearboxes all in a much smaller envelope. This will result in reducing the total cost of ownership and promoting ease of use for our customers."

Genesis Robotics' revolutionary LiveDrive™ Direct Drive Motor improves performance, reduces maintenance and increases uptime. This level of speed, torque and precision has never been available in a such a compact device with such simplicity.

"This collaboration between Demaurex is significant for Genesis because it demonstrates that the power density of the LiveDrive motor can redefine the Delta Robot, taking it to a level that has never been seen before in practical application," said James Klassen, inventor of LiveDrive.  "The platform itself is what the industry has been waiting for: a high torque actuator that delivers three times higher torque density, high peak torque capacity, and the highest levels of precision. Taking advantage of three foundational discoveries – Magnetic Amplification, Advanced Structural Magnetic Architecture, and unparalleled Heat Dissipation – the LiveDrive Direct-Drive motor provides manufacturers with the ability to design simpler, faster and more precise robots and machines."

Chris Di Lello, CEO of Genesis Robotics and Motion Technologies, said: "We are honoured to work with Demaurex SA as we believe that this collaboration demonstrates the powerful outcome that can be achieved when two companies with shared values, an intense desire to improve on the status-quo, and a deep respect for each other work together in true partnership."

About Genesis Robotics and Motion Technologies - Motion Redefined
Formed in 2015, the Canadian-based Genesis Robotics creates motors and other mechanical innovations that will change how robots and machines are built and move. In April 2018, Koch Engineered Solutions made a strategic and controlling investment in Genesis Robotics to commercialize inventive motion technologies such as the LiveDrive™ direct-drive electric motor, the REFLEX™ Torque Amplifier gearing system, and other technologies under development. www.genesis-robotics.com

About Demaurex SA
Part of ROTZINGER Group, Demaurex is a leading supplier of Delta robotic systems to the chocolate, biscuit and pharmaceutical sectors as well as non-food industries.

The principal of parallel kinematic Delta robots originated at the Swiss École Polytechnique Fédérale de Lausanne where a team led by Professor Reymond Clavel completed the first concepts and developed the primary industrial units. The Delta robot, which was the first to make high-speed vision guided picking for lightweight products available to the manufacturing sector, accelerated packaging lines and increased efficiencies through its unique design of three translational degrees and one rotational degree of freedom. www.demaurex.com 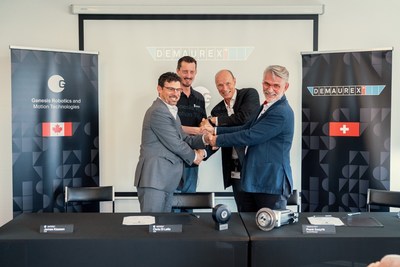